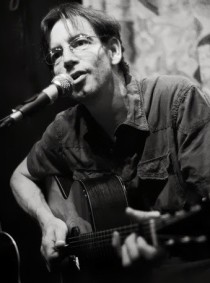 "This man has got the Blues. You hear and feel it."

"Alwin Schönberger almost intrusively created himself a good name in the Blues scene."

"A may-sided and virtuous musician."

"Alwin Schönberger is one of the upcoming talents in the vibrant Viennese Blues scene. His use of the acoustic guitar clearly proofs that a thunderstorm of decibels is not crucial to fascinate the audience."

Gigs in all important Blues Clubs in the area of Vienna

When I first met the Blues …

… is the title of a song on the album "First Blues" and there was indeed some kind of an initial experience: Alwin Schönberger, born in Vienna in 1968, came in touch with the Blues when he saw a scene with John Lee Hooker in the movie "Blues Brothers". Hooker sat on the street and was playing his standard "Boom boom". Subsequently Schönbeger listened to and studied almost exclusivly the old traditional Blues - acquiring the songs as a complete autodidact.

Among his great role models are legends like Brownie McGhee, Mississippi John Hurt, and Lightning Hopkins. Meanwhile his interests have shifted also to virtuous fingerstyle guitarists such as Merle Travis, Chet Atkins, Doc Watson and - to emphasize the younger generation of fantastic fingerpickers - Richard Smith.

All these influences strongly impact Schönberger's live performances, always presented with the classic fingerstyle-technique where rhythm and melody are played simultaniously. Additionally, you won't see any gig without a slide guitar. 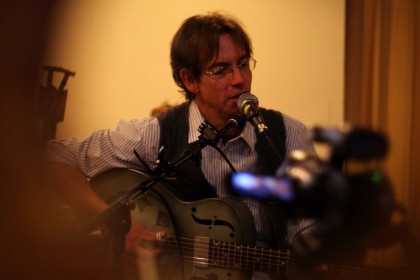